Check out Mike's updates of the last couple weeks at mikeandjoy.net.

We are now back in Zion for 10 days, taking advantage of our coinciding Spring breaks. Wes and Steph were here until this morning, at the tail end of their Spring break. It was great to hang with them for a day. We'll keep updates coming along this trip.

The 24 Hours of Sunlight

So, finally an update on how the race went! It was definitely a learning experience, overall very positive, and something I hope to do again. A big thanks to BJ, Sari, Jen and Jes for dealing with my skins, my demands, and my exhaustion!

I started the day out pretty fast, probably too fast, (a common rookie mistake) and was actually in first place for the initial 4 laps. As the day lingered on, I found a steady rhythm and a more reasonable pace. Darkness settled around 6:00, and gnawing fatigue and a hacking cough forced some much needed rest. After a couple of hours, a few fellow racers relayed the news that my place standing was slipping, so I braved the cold for some more. The early morning hours were, in a word, tortuous. It was cold, I was getting tired, I battled frequent waves of nausea, and was having a very difficult time breathing. Sari has experience with 24 hour races and knew the 4-6am window would be the worst, so she drove up to ski a couple laps with me during that time. Soon after she left, the sun came up and the race energy rose with it. Slowly but surely, I continued to plod along for the final hours. Around 9:30 (the race ended at 11), I finished my 16th lap a few seconds behind another woman, Liz, also vying for third place. At the beginning of our lap, I proposed to her that we just agree to tie for third. We were solidly out of second and ahead of fourth, and neither of us felt like pushing the pace at that point in the race. So, we took our time, chatted the entire lap, and snowplowed across the finish line together. It was a very special ending to an amazing race! We completed 17 laps for a total of 25,500 feet of elevation gain and loss--the equivalent of skiing almost all the way up Everest from sea level in a day.

The inaugural "24 Hours" was two years ago, and Polly McLean was the only solo woman. Amazingly, she completed 20 laps with no competition pushing her. Last year, she returned to win again with just 11 laps, but was 4 months pregnant. There were 4 other women last year, none of whom did more than 10 laps. This year, the women came out in full force! There were 11 women--the winner broke a world record with 22 laps, Polly took second with 20, Liz and I tied with 17, fourth had 16, fifth and sixth had 15, and so on. I was absolutely spent after 17 laps and wanted to recognize how well each woman did out there.

Here are some photos: 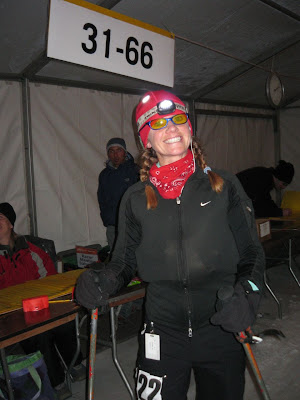 This was the tent that each racer had to use to check in and out of each lap. My jacket is stuffed with my skins, which I rip off of my skis at the top and then ski down. I didn't carry a pack at all, but had a 6oz water bottle in my pocket. 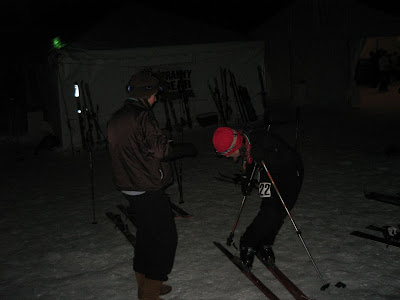 Jen helping me at the start of a night lap. 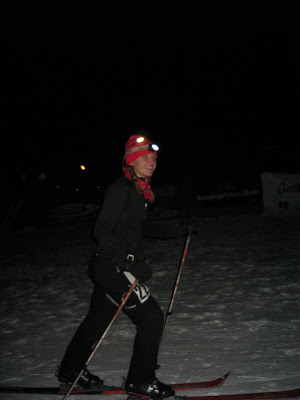 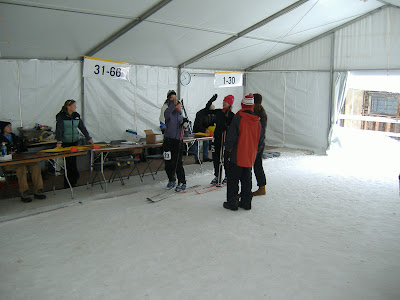 High fives between me and Liz at the end of our last lap. 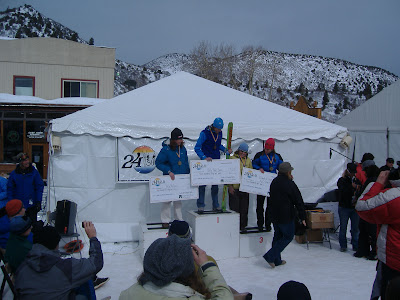 The podium. Molly Zurn in first, Polly in second, and Liz and I in third.
Posted by Joy Joy at 8:02 PM 2 comments: