Brief Update From the Road

Mom is out on a 22-mile trail run from Tuolumne Meadows to Yosemite Valley so Selah and I "headed to town"(Lee Vining) after going for a good hour run of our own. I don't have much of an update because I can't find the stinkin' camera cord. I'll work on a proper update on mikeandjoy.net once I locate the cord (a slight challenge) and find the time (a huge challenge).

We've been staying busy in the Tuolumne Meadows region of Yosemite National Park. Joy's parents left yesterday and we got plenty of climbing, running and hiking in with them. I climbed the Salathe Wall on El Capitan about a week ago, spending one night on the wall. That was a big goal on the tick list this summer. Joy and I have been enjoying some great cragging together. Yesterday we did a couple of 200-foot long face pitches that were delightful. Joy's dad and I did some nice multi-pitch climbs together including the classic Cathedral Peak.

Currently, I'm sitting in the van outside the Mono Cone, a classic old-school burger joint.

Well, Selah recently awoke from her nap in the van and I just heard her let out a massive poop. So.... I guess I better tend to business.

More soon!
Posted by Mike Schneiter at 3:16 PM No comments:

How We Roll-Photos of Roadtripping with a Baby

Road tripping with Selah has been pretty great so far. She seems to love sleeping in both the van and the tent and doesn't seem to mind the lack of schedule or being outside 24/7. Actually, she really seems to be enjoying herself and has started consistently sleeping through the night, or at least until 5 or 6am. We are having so much fun showing her around and dreaming of her climbing these walls some day. We have been in Yosemite Valley for almost a week now and will stay as long as it stays cool and we can keep scamming the system to stay in Camp 4 (there is a 7 day limit...poo). My parents are on their way to join in our fun. Even though mom grew up in San Francisco, she has never been here. I cannot wait to show her El Cap and point out the route that Sarah and I climbed exactly one year ago. 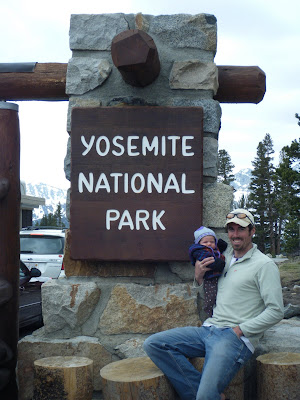 It was COLD when we got here! It snowed as we drove through Tuolumne (10,000 feet) on our way to the Valley and has been in the 70's for the last week. Compared to the more normal high 80's, it has been quite pleasant! 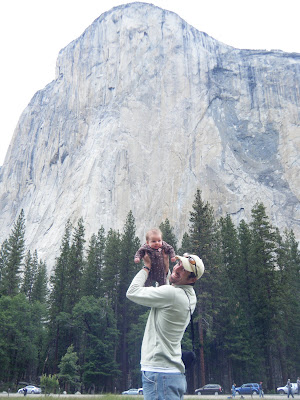 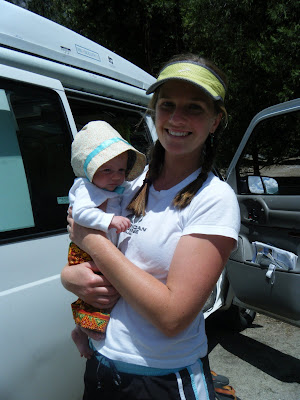 S and I pre run. She is wearing the bonnet Reese made for her. 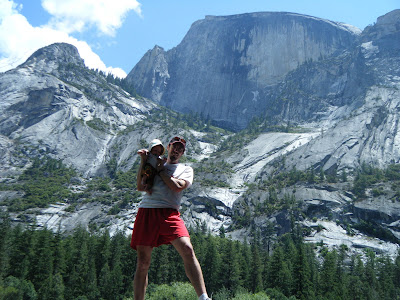 Where else can you run on bike paths to views of Half Dome? 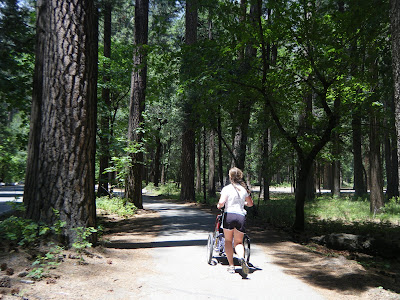 Mike finished up his Master's Degree in the first few mornings we were here (Woot Woot!). I took advantage of the alone time and explored the bike paths throughout the Valley with Selah. 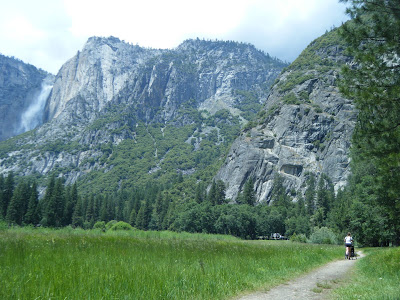 Notice Yosemite Falls in the background. 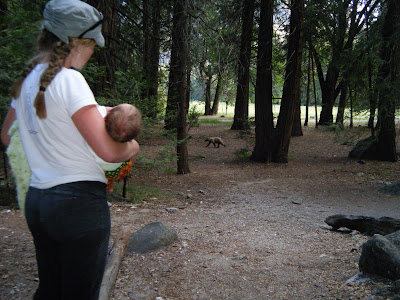 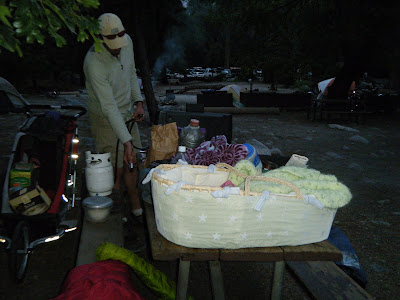 This is how Selah sleeps in Camp 4. She is usually in her Moses basket, which we move from picnic table to tent to crag etc. We think it is so cool that Selah is already sleeping in Camp 4! I had to wait until I was 22 to see this famous place. 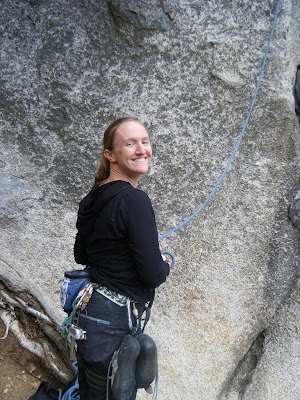 Sarah's climbing partner hasn't arrived yet, so we have been able to hang out with her for the last few days. We ran almost 10 miles this morning. 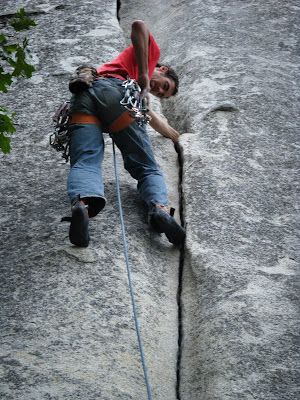 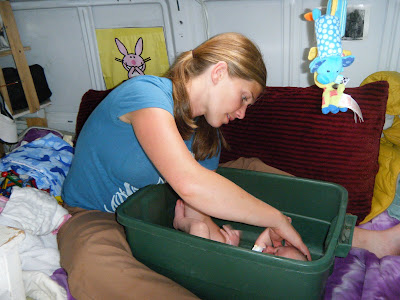 How we bathe the girl on the road. Mike heated up water that we put in the water bottle and poured on her in a Rubbermaid in the back of the van. 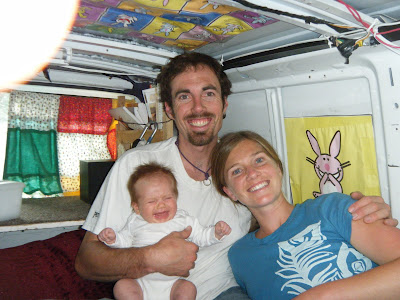 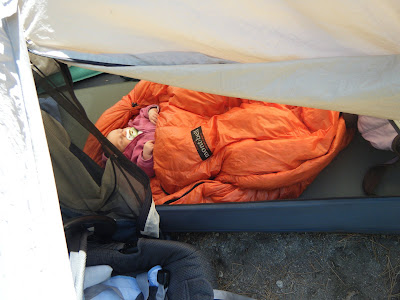 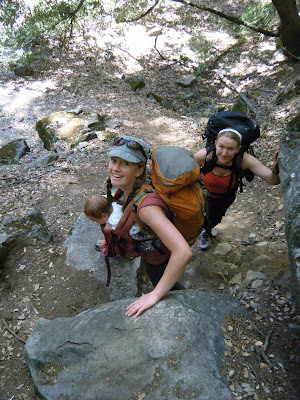 Hiking with S and S to crag at the Pat and Jack Wall. 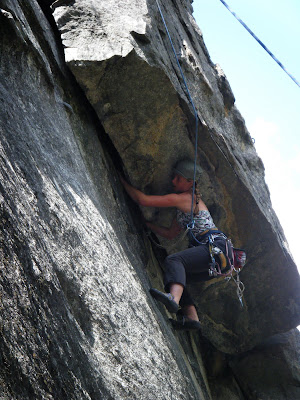 I really just put this pic on because my Delts look nice :) 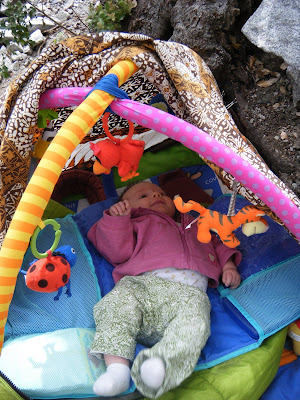 S in her happy little tent at the crag.

On the Road Again!

Mike, Selah, and I are on our 5th annual summer road trip. Mike is great about updating mikeandjoy.net all summer, so check on our status there if you want updates. Have a wonderful summer everyone!
Posted by Joy Joy at 1:51 PM No comments:

Back to work...for a bit

I officially went back to work this week for a total of 5 working days between maternity leave and summer break--I think we worked this pregnancy thing out pretty well! Thankfully, my mom was able to help us out and watch Selah while I worked mornings and bring Selah to the school to join me in the afternoons. As it was the last week of school, things were pretty relaxed so I just tied up loose ends and showed off my girl. Even though I only had to spend about 4 hours at a time away from her, I missed her like crazy! I can't imagine having to go back full time for all of the foreseeable future like most Americans must do. I am SO thankful to have summer break off with my family...starting NOW! We are planning to hit the road Monday on our way to Yosemite and the Sierras for about 5 weeks, then back here for a wedding mid July, then to the Czech Republic for another wedding, then back to work mid August. It should be a great time. We are very much looking forward to exposing the little one to camping, backpacking, fishing, climbing, etc. She is going to spend her first summer on the road! We are already imagining naps in El Cap Meadows, baths in the Merced, peering off of the top of Half Dome--what a life!!

In other news, we just found out that we will be living on campus at the school where I work next year and for as long as I am employed there. While it is a bummer that we have to move, the benefits greatly outweigh the inconveniences. Mike is already talking about unlimited delicious food and how he won't have to do dishes anymore. I am excited about Selah having a grassy 300 acre campus to explore with all of the other "faculty brats" and 150 ready and willing babysitters. I already get to eat without her in my arms when the students are around--as soon as I enter the Bar Fork (aka cafeteria), one student or another sweeps her away and plays with her as long as I can tolerate it.

Selah had her 2 month check up this week and her first round of vaccinations. I think the shots were much harder on me than they were on her--and I wasn't even in the room when they poked her. Just thinking about it while I waited made me nauseous and sweaty. Despite all of the recent controversy, we have decided to vaccinate with the CDC recommended schedule. It was very nerve wracking, but we think it was the right decision. She now weighs 10 lb, 8 oz (50th percentile) and is 22 1/2 inches long (also 50%) and is in the 99th percentile for cuteness.

Running is finally starting to feel kind of normal again. Last week, Sari drug me out on my first long run since my December half marathon--10.5 miles on flat pavement while she pushed her 2 year old and many toys in the jogger. I felt pretty awful at the end, but it set me in motion for getting my endurance back. I did a 13 mile trail run with lots of hills a few days later and my quads are still sore. But who cares?! I'm back! I'm truly more excited about long trail runs this summer than I am about climbing! El came up with the idea of doing the Leadville 100 next August and I invited myself along, so now I have that in the back of my mind while training. It is a long way away, but if I get the goal in my head now, I will be more motivated all year. (Now I'm committed since I wrote it on the internet). We decided that next summer will be the best option for training for and completing a 100 miler since we each have only one child--here's to not getting pregnant again any time soon!

...And a few pictures of course! 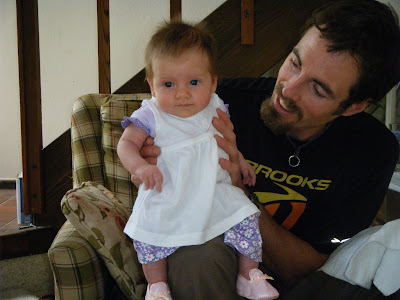 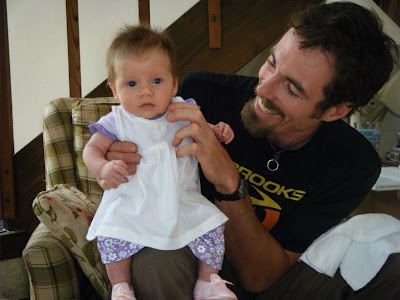 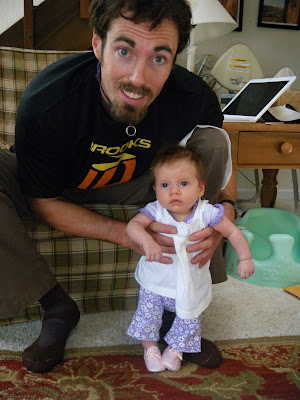 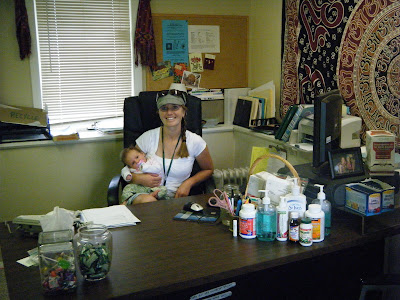 This is Selah and me in my office at school. 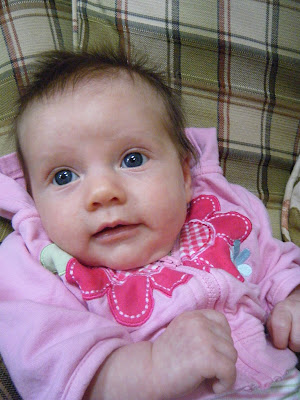