Back in the Saddle!

Went for a run with some ladies yesterday and felt great! I am really excited that I was able to recover from the weekend so quickly. It has inspired me to do more--I spent lots of time searching for summer ultras last night.
Posted by Joy Joy at 1:44 PM 2 comments: 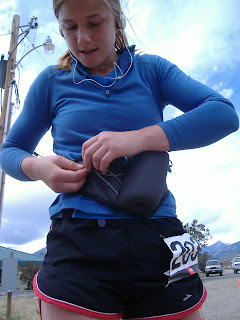 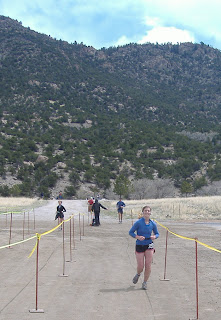 This Saturday was a turning point in my athletic career (I think...). I ran my first ultramarathon, a 50-mile trail race in the mountains near Buena Vista, CO. It was called the Collegiate Peaks Trail Run (collegiatepeakstrailrun.org) and it was a fantastic day! Mike and I drove in Friday night, went to the prerace meeeting and met some of the other racers. The weather forecast was not in our favor--it was supposed to rain all day and be pretty chilly. But, we woke up Saturday morning to warmer than forecasted temps feeling ready and excited. The race started at 6:30. There were about 200 runners, most of who ran the 25 mile option. The course is 25 miles of mostly double track, with some single track, a couple miles of pavement, and about 3500 feet of elevation gain. The 50 milers do the course twice, once clockwise, the other counter-clockwise. The start and finish are in the same place. I started off pretty slowly, just trying to relax and conserve energy. I was feeling good and got so into the groove that I missed a turn and ran off course for a half mile or so around mile 10. When I figured out what I had done, I was kinda pissed, so I turned around to get back on course and sped up to pass all the runners that had passed me. It took me about 12 miles to do all the catching up, but I did it! It was encouraging to have started off slowly and be able to pass people instead of starting too fast and getting passed.
Though I ran the first half feeling strong and really without pain, I still doubted my ability to complete the second half. Even when the race is 50 miles, 25 miles is still a long way to run. So, by the end of the first 25, I felt like I had just run 25 miles--tired! I was tired, but my stomach felt fine (that is often a problem on long runs), I had no blisters, and had no joint or muscle pain. I had to do some positive self-talk to while approaching the half way point, "You knew you would be tired, you expected this, you have no pain and therefore no excuses not to continue!". When I reached the turnaround (after 5 hours of running) and the 25 milers were finishing, I was beaming, pumped, and totally motivated to go for it again. Mike gave me a little cheer and a fresh protein bar and I was on my way. Because the two laps of the course are run in opposite directions, all of the 50 milers get to pass by the people still on their way to the finish line (or turnaround). That was a really neat experience--encouraging and being encouraged by the other racers. Surprisingly, I continued to feel pretty good through the second half, though I still doubted whether or not I would finish. I think I kept expecting to hit a wall, but I just never hit it. I was able to pass a few people--I would catch them, run and chat with them for a while, then move on to the next person. When I reached 40 miles, I realized I was counting down in single digits and started to believe I would finish. At mile 48, I was greeted by a cold, 20-30mph headwind and 2 long, straight, flat and paved miles. That was torture, but little by little, I moved closer to the end. I crossed the finish line 10 hours and 31 minutes after I started. All at once, I was elated, euphoric, and exhausted. I did it! Now all I want to know is--when is the next one?!
Posted by Joy Joy at 11:18 AM 2 comments: 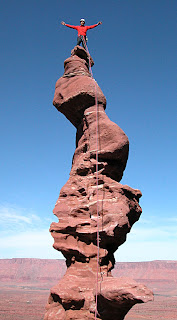 Here is a web photo of Ancient Art. I'll put one of us in when I get the photos.
Posted by Joy Joy at 1:22 PM No comments:

And so begins the blogging... 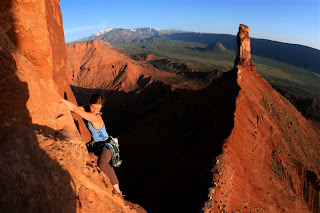 So, here is my first real blog. Mike does a lot of info sharing on our website, mikeandjoy.net, but I never really contribute. Considering all the blogging hype (everybody that's anybody's got one!), I thought I'd give it a try. Please post a comment if you read this!
Mike and I had a fantastic three day weekend with our SLC buddies Mark and Katie in Castle Valley. We started off with a bang, with Katie and I roping up together to do Fine Jade. It is a classic 5 pitch 5.11 desert route on the Rectory, and was the hardest route either of us had done as an all woman team. It was pretty sustained, with 10+ OW right off the deck, lots of 5.10 fingers, and a crux 5.11 thin fingers bulge. We felt like champs for completing the route on our own! Sunday, Mike and I simuled the North Chimney of Castleton and relaxed in the sun on the summit before heading back for beers and burritos. Monday, all four of us did Ancient Art, another desert classic in the Fisher Towers. The last pitch is a convoluted corkscrew that tops out on a summit the size of a pizza pan. Yowser! It was awesome! We finished up the weekend with a dip in the Colorado before heading home. A good time had by all.
Beyond that, Mike is busy with his Master's work, and I have one final left before my semester ends. We are taking off again this weekend for a trail race in Buena Vista, the Collegiate Peaks Trail Run. I'll write about it upon our return. Until then, cheers!
Posted by Joy Joy at 12:48 PM 3 comments: