Felt a little slow in the beginning, got stronger as the race went on, a course personal best of 4:20:33, a PR by 18 minutes, finished 4th woman overall and felt incredible at the end, was literally jumping up and down with excitement. Happy girl.

This was my 4th Desert RATS ('06, '07, '08, watched in 2009, '10) and I came with a single goal: PR. My previous times were 4:49, 4:45, and 4:38. This is a very technical and hilly course, so those times actually landed me in the top 10 every year. I opted against wearing a watch and figured I'd just do my best and ask other racers if I was ever curious about the time. As race week approached, I was able to get out for several 2 hour runs and a couple of 3 hour runs, not ideal, but apparently sufficient training. Considering I planned on using this race as "training" for the upcoming 50 and 100 milers, I felt I had been a little lax in my preparation. Welcome to the world of baby and full time job!

El, Bobby Lowe, Mike, and I all planned on getting out of town Friday afternoon for the 2 hour drive to Fruita for the prerace meeting. As these things always go, we finally left at 6:30, about 30 minutes before packet pickup closed. Thankfully they allowed race day pickup so we were able to relax, eat, and have a pleasant drive to the campsite. We pulled into camp at dark, El set her tent up, Bobby realized he forgot his, and Mike and I arranged the van for sleep. This was going to be our first night sleeping in the van with Selah since last summer, when she couldn't really even roll over. Van sleeping with a 4 month old is quite different than with a 12 month old. There is a little cubby that we made for her at our feet, but she can stand up and look at us whenever she feels like it. She was overtired and screaming as we tried putting her down, but she eventually fell asleep for a few hours. She woke up sometime in the middle of the night and banged her head on the metal van wall (no bumper yet, but we'll make one before the next trip for sure), which sent her into another crying fit. She ended up snuggling between me and Mike in the twin-sized van bed. Cozy. It didn't really matter that I hardly slept that night, as I can never really sleep before races and they say it doesn't affect race performance. What is more important is proper sleep in the days leading up to the race, not the night before.

4:45 came around fast and I got up to make coffee, eat a bagel, and rouse El and Bobby. We were in the car by 5:20 on our way to the starting line and 6:30 race start. Why do races here insist on starting so dang early? As always, I skipped the warm up and instead took care of vital functions and got in a little stretching and fluids. At 6:30, we were off! The first mile is on a flat gravel road before the race heads up it's initial steep climb on rocky single track. I've learned through the years to run that first mile fast or get stuck behind someone that can't skip through rocks. I arrived at the first aid station, mile 6, in about 54 minutes, 3 minutes ahead of my old PR split. I was happy with this but my legs were feeling tight and heavy in the cold air and I didn't think I could maintain the pace. There is another long climb after the station, so I slowed down and walked some of the steeper parts. El caught up with me and we proceeded ahead together, she helping me to keep my pace up. By the time we got to the second aid station, she passed me and slowly started to pull ahead. Between aid stations 2 and 3, the course profile flattens and the surface becomes more even--El's specialty. She cruised ahead and was out of sight by the half way point. This is the most beautiful part of the race. The course winds in and out on top of 200 foot tall sheer sandstone cliffs above the Colorado River amid bursts of Indian Paintbrush and Juniper. 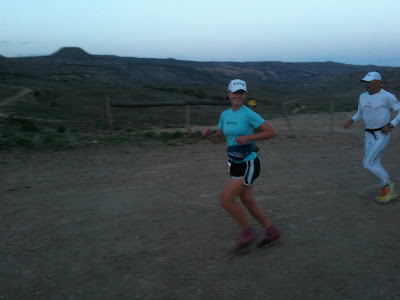 After finishing the fast first mile, heading onto the first climb and single track.

I arrived to the 3rd aid station, 12.5 miles, at around 2 hours feeling fresh and loose and enjoying the warming air. At this point, I was confident I could PR unless something really unexpected happened. With a previous PR of 4:38, I would have to slow down a LOT to miss my goal. The race gets technical and hilly again there and stays so for the majority of the remaining course. I got into a nice rhythm and started picking people off as I completed the 7 miles to the final aid station. 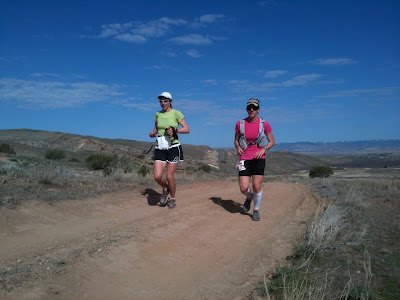 El and Ashley coming into the final aid station at mile 19.5.

I came into the aid station just behind another woman but left before her and never looked back. There is a heinous 700' climb that begins near mile 20 and I ran nearly the entire thing, really out of fear the woman behind would catch back up. Passing her gave me a confidence and energy boost and I was able to overtake several men on the long climb. I also knew that once I topped out, it was all downhill to the finish. 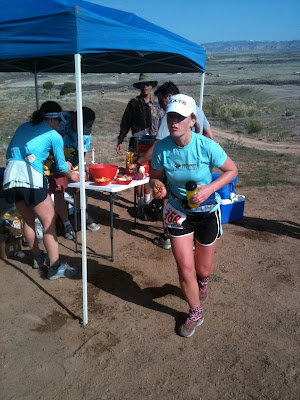 Sneaking out of the last aid station ahead of the woman that beat me to it.

Racing downhill through the rocks is what I am best at, so I knew if I could stay ahead of the woman I had passed (and another I saw creeping up), it was very doubtful they could catch me on the downhill. My legs and lungs felt amazing through this section and I flew through the last several miles. At the end of the trail section, just before the race turns onto the road, Mike was waiting for me and told me another friend, Ashley Arnold, was just ahead. I hauled down the final steep descent and got within about 50 feet of her on the road. I think I ran that last mile in about 7 minutes trying to catch her, but she heard me behind and put all she had into it, which was just a little more than me. I crossed the finish line 30 seconds behind her, 4th woman finisher (dare I say that 4 50-mile women beat me to the turnaround?), and with an 18 minute personal record and just 3 minutes out of 2nd place (El was 2nd!). I was so excited to have finished well that I was literally jumping up and down and seriously considered heading out for another lap. Not that it matters, but all of the racers with GPS's said that the race was actually just over 26 miles, not 25.

The race gave me a much needed confidence boost for this weekends 50 miler, Collegiate Peaks Trail Run. The only thing that hurt post race was an old ankle injury--no IT band pain, no blisters, no GI upset, hardly a sore muscle. I was even able to get out for a 2 hour run on the course Sunday morning for a little bonus training. Definitely a great weekend! If you're still reading, I'm impressed.

Now I'm laying on the couch with an ice pack on my right quad. Somehow, I strained it while hiking today and am really hoping it doesn't give me any trouble this weekend. Wish me luck!

And for the grandmas: 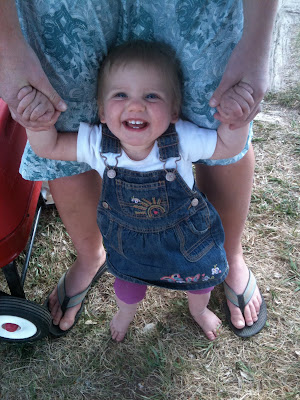 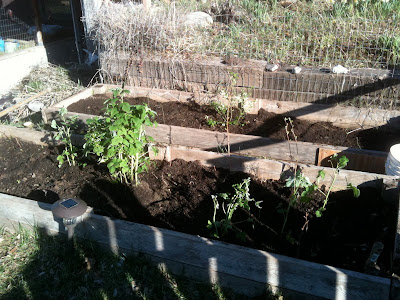 We planted raspberries and blueberries this weekend! They looked pretty good until the deer got to them last night. Now we just have stubs. 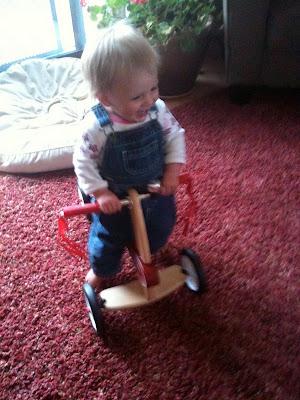 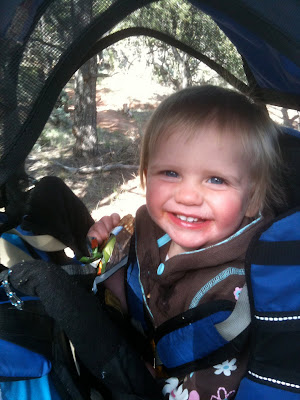 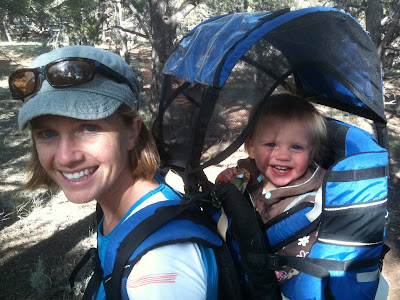 On our hike today. 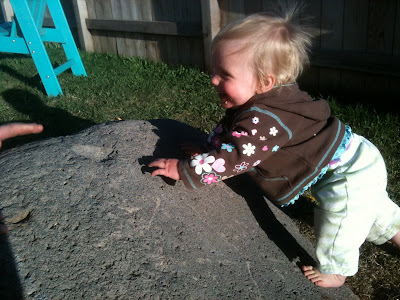 Super inspiring! Congrats on the PR!!

Joy, I love love love your updates, they just leave me wishing we lived closer so we could go enjoy those hikes with you guys!!! Way to go on your races too, very impressive.

Loved in more detail hearing about how your race went. Way to go El!! Don't worry about the berries you planted, the deer just trimmed them up for you! Love the shots of little miss precious.