Yesterday at Lowe's, Mike and I were picking some things up for our latest house project (see picture below). The man that was helping us called me mama and asked when I was due. "Just over 2 months" I told him, to which he raised his eyebrows and exclaimed, "two months?", as in, "are you sure you don't mean two weeks?" Then he told me, "You're going to need a third leg to hold that belly up". I almost slapped him. But, Mike has been encouraging me not to slap strangers in public, so I resisted. 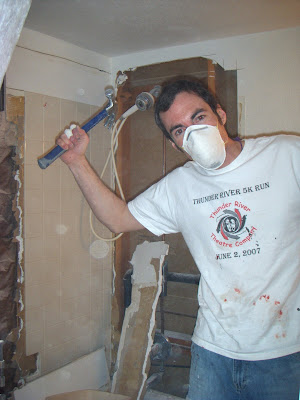 We tore out our old shower tile and are replacing it with pretty new stuff.

My good friend Sarah had bunion surgery today. I just took this picture of her, in all of her Percocet induced sleepy glory, on my couch. She's spending the night tonight. 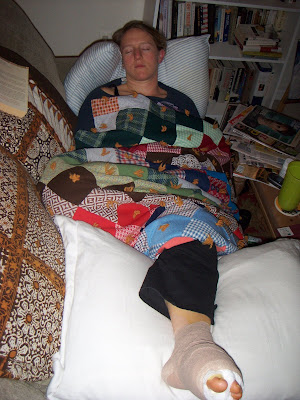 She had a get together Saturday night, and Mike made her a cake: 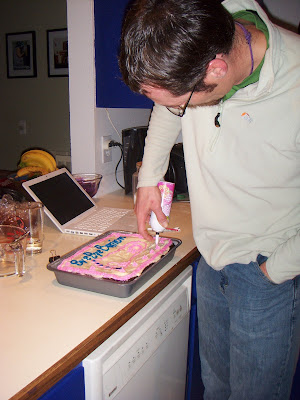 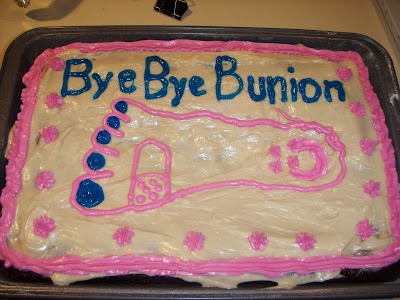 It was a big hit! 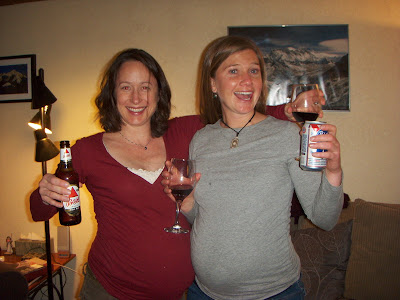 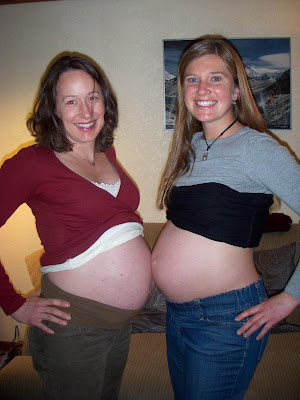 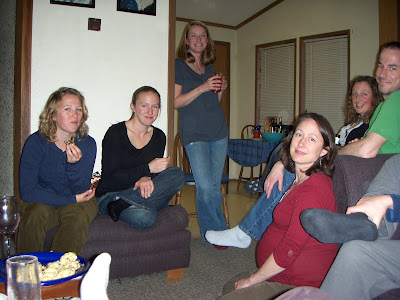 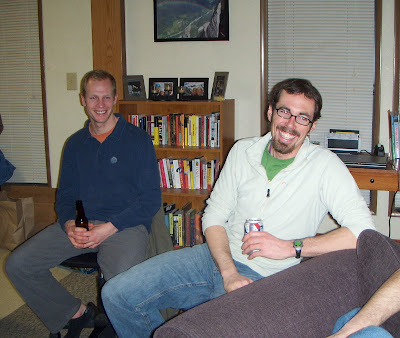 ok, seriously you do not look huge in the above pictures!! maybe when people ask when you are due, now would be the time to respond "Oh, I'm not pregnant" and then walk away without explanation....

I think you look amazing. Hands down.
Mike, that is a really cute cake. Well done! Good luck with your new tile; I bet your house is feeling better already without that bad-attitude-old-tile!

Ya know, I don't feel that huge either. I feel like I'm totally normal bigness-wise compared to other preggos. But what an a*hole comment, eh?!

Maybe the a*hole was making a prophetic comment about what you are carrying...could your little blueberry have a third leg? Just something to ponder.

Oh, and you are just a little thing, I like Lindsey's solution to rude comments, just leave 'em hanging.

what, you don't want to become a tripod? think of all the doors it could open for you and the blueberry.... i like the 'i'm not pregnant' response too. you're so sweet for taking care of sarah! psyched to make an appearance in tidbits of joy... loved the bunion cake, bunions are yummy!

Or you could be getting the comments that you're too small and you're baby isn't getting enough nutrients. It's usually the men who make the worst comments. Figures... And we all know you look great!

Good point, Sari. I met with my midwife today and she said I'm measuring right on target, 30 weeks.

i'm sorry but that third leg comment made me laugh out loud.... i can only imagine having that said to me.....

I love the belly picture! You know the third leg comment could just mean you are having a boy maybe in two weeks or so. LOL.

Way to go Stef. The comment on that third leg i mean.
Ma

Also love the bunion cake. We of the Nutting clan are jealous of Sarah. \
Also, Mike in the shower destruction mode is looking really good!
Ma