Selah and I are in Maui with my parents! For two weeks! Arrived last night and the 7 hour plane ride with an 11 month old was only slightly heinous. We started off in Aspen, where our flight was delayed by over an hour. Selah was happy despite not getting her morning nap. The delay got us to Denver with only a few minutes to get to our next flight. I had the diaper bag ready and Selah in the Ergo before the seatbelt light was off, and it's a good thing! I ran with her head a-bobbing and made it to the flight right as they were closing the doors. I was the last person on board and didn't care that my luggage would probably stay in Denver (it did) because I was going to Hawaii! The first thing I noticed when getting to my seat (3 rows from the back and everyone else was already seated) was that the woman next to me was wearing a Hawkeyes shirt. "You're from Iowa? Nice!" I knew I had friendly row-mates, a necessity for a transoceanic flight with an infant. It turned out that she and her husband had 3 kids including a 10 month old, all home with grandma, so they were very understanding. Selah did very well considering that she had to sit on my lap for over 7 hours on that flight alone, and that we traveled for about 12. But by the end of the trip, she was D.O.N.E. and screamed while I waiting in vain for my luggage to arrive. I never know what to say to the onlookers who think a.) you really should shut your kid up, geez, there are other people around, or b.) what have you done to make your kid so pissed, or c.) want to help in some way. She's a baby. Babies cry and it's just okay. Thankfully, the kid stayed up late enough to make the 4 hour time change and was normal and happy today. 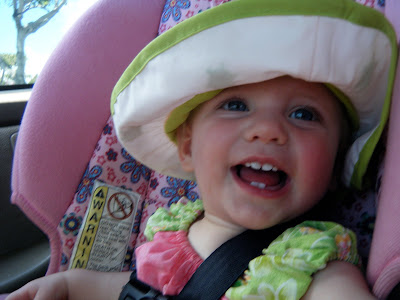 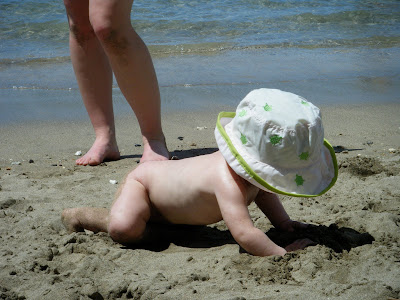 Nudie beach time. She loved the sand but wasn't too sure about the water (a little cold and she's not used to the waves). 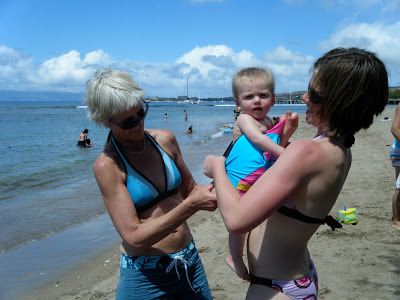 Mom and I trying to get her lifevest/swimsuit thing on. 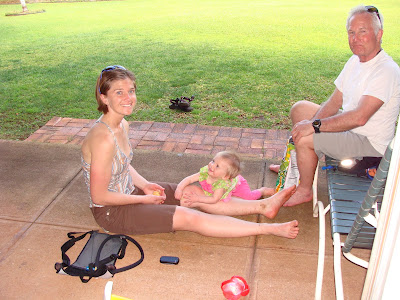 Chilling out at the condo this morning. Dad took me on a nice walk early today to show me the scene of his rescue two days ago. He was out snorkeling and came upon a young couple that had been caught in a current without fins. They were in the process of getting sucked out to sea and the man had essentially rolled over and given up. The guy weighed over 200 pounds and dad managed to drag him back to shore and then went back for his wife.

I was only partially jealous until that sun-kissed photo of you and uncle ray. Now I am over the top green with envy! In a good way :)
Way to go Lifeguard Ray!

Sweet, I wish I was with you guys. Keep posting pictures and video - I love them!

The first time I watched the video I thought, "what are you doing with my girl, letting her run around naked in the cold." Then, I remembered, oh yeah, it's 70-something there and 40 or 50-something here. Big difference. I'm just jealous!

Oh, I am SO jealous! The first video clip even has the sounds of Hawaii! Birds, waves, and happy people :). Enjoy your much needed/deserved break from the routine. Wish we were with you- wouldn't that be fun?