El delivered her son, Reed MacNeil Russell, yesterday at 12:02 via C-Section. The CS followed an attempted home birth and she transferred to the hospital Sunday night, 24 hours after her water had broken. The contractions she was having at home, albeit very painful, were too weak to allow her to fully progress through the labor in a reasonable amount of time. She labored at the hospital with Pitocin to strengthen the contractions for another 15 hours and pushed for 5 hours. Unfortunately, after that super ultramarathon of work, Reed would not descend the birth canal and was starting to show signs of exhaustion (as was El). She has maintained an incredibly positive attitude and is delighted to have a healthy baby boy. He is nursing very well and mom and dad are recovering as well as can be expected. Reed is currently in the nursery due to breathing a little fast and needing a tiny bit of oxygen, but is expected to be able to sleep in the room with Rob and El by tomorrow night. 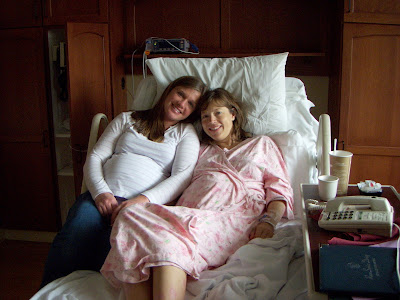 And, yes, for all of you who are obsessively checking my blog, I am still very pregnant. 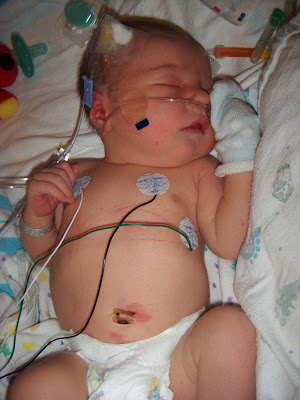 Perfect little Reed. The little thing on his head is his IV for antibiotics. He is on antibiotics preventatively, as rapid breathing can be a sign of infection. All of his lab tests, however, have come back negative and indicate that he does not have an infection (YEAH!!). The wires attached to his chest show the nurses his heart rate and breathing rate. They were able to reduce his supplemental oxygen even further this evening, also a very good sign.
Posted by Joy Joy at 8:04 PM

Thank you! I have been checking Elinor's blog as obsessively as yours! Glad to hear mama and baby are well - I have been praying for them...and you, too. :)

Me too Reese. So happy El is doing so well, ultramarathon woman that she is!!
meg

Thinking about you and praying for you lots. Your pregnancy photos are beautiful! That is quite the story about El - I'll be praying for her and Reed's recovery.
Keep your eye on the prize!
Lauren