Mom sent me a few more photos from her time here, so I had to share. Mike's birthday was last Thursday. As a joke, I made a fake gift certificate saying that I had spent $245 on a spa day for him. (You can click the picture below to read it.) Anyone who knows my husband realizes how completely out of character that would be. All the man wants is gear, of course, and I'm glad I married a man that prefers climbing gear over spa trips. It was the worst gift I could think of and he COMPLETELY fell for it. He was really sweet about it, too, and gave me a nice hug and a weak "thanks, honey!". What he was thinking though, was, "man, I wonder how many bolts I could buy with $245?!". 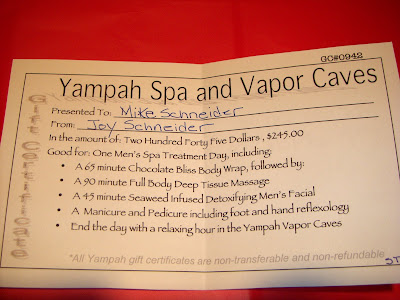 I even had my mom write and misspell our names to make it look more legit. 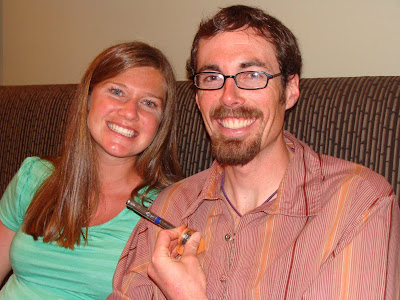 Later, when we were out to dinner, I gave him his real present, 34 climbing bolts. 33 for the years he has completed and another for a great year ahead. Mike LOVES to establish new climbing routes in the area, and bolts are necessary to do so. 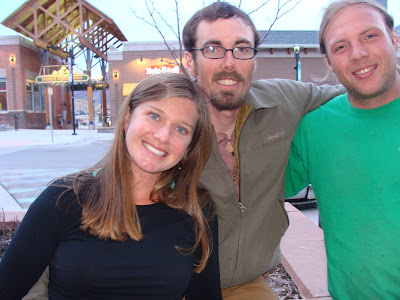 Another shot of us before BDay dinner with Mike's brother Danny. Danny is engaged to a woman from the Czech Republic, so we are all headed to Europe in July for their wedding. 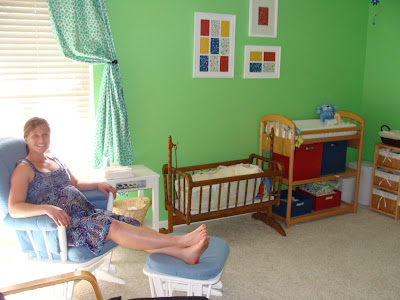 A poor photo, but here is the nursery in completion. Notice my red toenails--my mom insisted :). 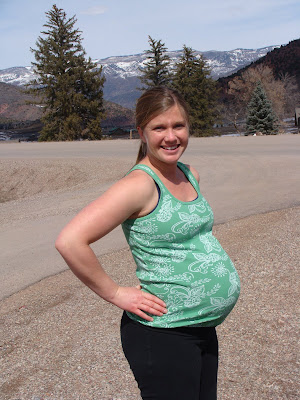 Working out. Mom and I hiked about 5 miles every day while she was here. This week since she left, I have had a running resurgence. I've run the past 4 days straight! It has been in the 60's or 70's for the past 10 days and is now blizzarding outside.
Posted by Joy Joy at 3:39 PM

you are so cute Joy! You, (and the nursery) look great! and I love the joke you played on Mike. What a great idea!

Mike received the "spa day" like a true gentleman. It was truely a picture of his love for his wife.
Ma

so much to say: I really appreciate you blogging regularly at this point because every day I think "Joy could be at her house in labor!" and then I can read your blog and find out!, I love the nursery and its colors, so warm and fun. And lastly I am very jealous of you in a tank top in the sunshine, we are not quite there yet in this part of the country. Have a good day!

Joy, thanks for keeping up with your blog as you near the end of your pregnancy! I love the pictures and I'm so glad that your mom got to come out and take care of you for a while. I can't believe that you're still running. I want to be doing that at the end of my pregnancy too!

I'm with Lindsey, almost daily updates are great for all of us wondering what's happening with our very preggo friend in Glenwood Springs! Did I lend you that cute green tank top? If not, I have one just like it :)

Yes you did, Reese! Thank you! Let me know when you need your maternity clothes back! I plan on sending them to you as soon as I pop, but let me know if you need them sooner.

That is the best gag gift I have ever heard of. I love it. And great job on the game face, Mike!
-Wes-